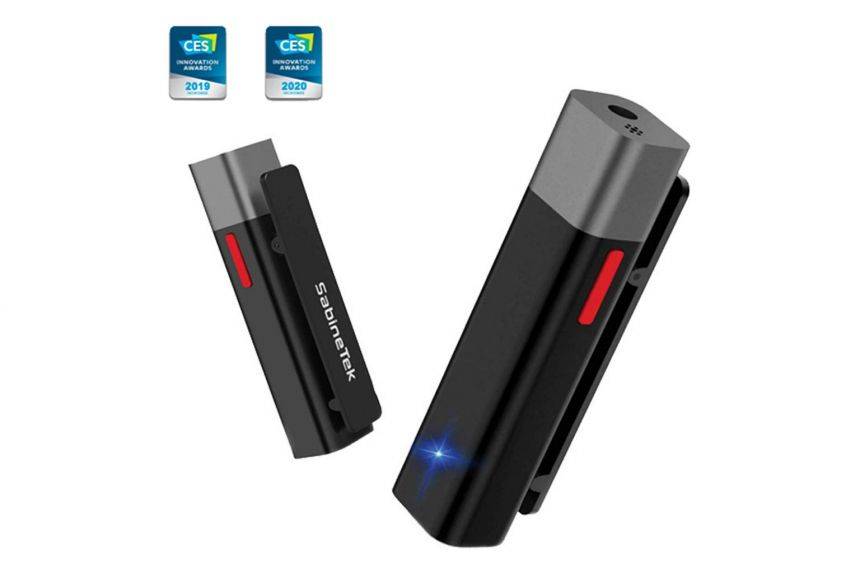 Often at product launches overseas, I have to create short videos onsite and file them quickly.

But with the din created by the hundreds or even thousands of journalists there, getting my voice recorded clearly is a big issue.

I use a wired lavalier microphone, but still have to shout. Not to mention, the short cable of the microphone means the smartphone has to be near my face, which is not too flattering.

The Sabinetek SmartMike+ (available on Amazon and Shopee) would have come in handy during those times.

Designed to work primarily with smartphones and targeted at video bloggers and podcasters, this Bluetooth 5.0 wireless microphone has a range of up to 10m.

It is shaped like a rectangular monolithic plastic slab, with a 3.5mm jack input port and the microphone on top. A micro-USB charging port is located at its bottom.

An elongated button on one side is for powering on the device as well as for starting or stopping the recording. On its rear is a clip to attach the device to your shirt.

To pair it with your smartphone, press and hold the side button for three seconds. The front LED indicator should start blinking. Choose SmartMike+ on your smartphone's Bluetooth setting to finish the pairing.

The windshields are particularly useful - cover the top of the SmartMike+ with a windshield and the background noise will be blocked out to a significant degree.

While the SmartMike+ works with all apps, it works best with its SMike+ companion app (available on Android and iOS).

The app has three modes - Audio, Vlog and Interview.

Vlog mode lets you record selfie videos along with audio - exactly what I would need for those product launches. In this mode, you can choose to start either recording immediately or with a three-second delay.

With the native app recording, I could hear echo and humming from my air-conditioner.

The audio quality is so good that my colleague at the video team asked about the microphone I was using after I filed several videos using the SmartMike+.

Interview mode requires you to have another SmartMike+ for the interviewee.

You can even connect one unit to your DSLR camera's microphone port so it works as a receiver, such that the SmartMike+ on you can transmit your voice to the camera. Unfortunately, I do not have two SmartMike+ to test this out.

Battery life is rated at five hours, which should be enough for most occasions.

• The SMike+ app is great in reducing background noise

Comments will be approved before showing up.